Yesterday I burried Nina, my dog. She passed away in induced sleep, after an unspecified illness which lasted about three months. She was healthy during most of her life, but she was very old at 16 years of age.

I thought I was prepared for this moment. We spent two years together, and while still alive I felt pangs of pain from the inevitable: I knew that she was old, that she wouldn't be with me forever, that she would die. I told myself that this was preparation for this moment, I was grieving in life so that I would not suffer as much when the moment came.

I've been crying a lot, but the pain is bittersweet. It is loss and gratefulness at the same time. She was a wonderful dog and we were lucky to have encountered each other in our lifetime. I feel like I need to write about her to help me through my bereavement.

How we came to meet

I came back to Puebla from Spain after living there during 3 years. My sister had three dogs in her house and the father of her child was not happy about it. She asked if she could send one of her dogs with me. I grudgingly accepted.

Her name at the time was Scrabble. She was a patio dog that didn't require much attention, she was OK just having water, food, access indoors was a plus for her. I was glad about the arrangement, a low commitment pet which would keep me company while I worked. 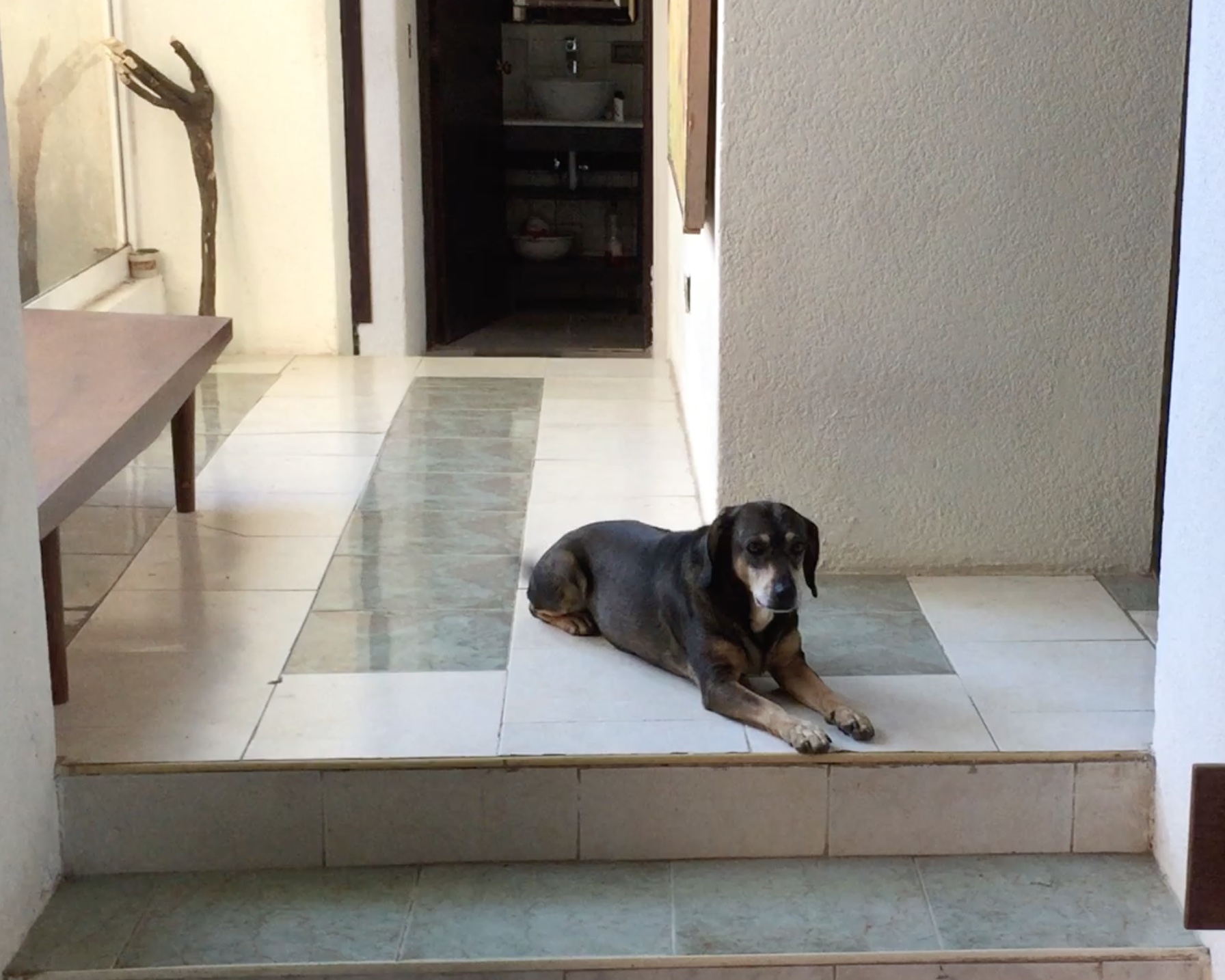 She would sit at the entrance of my office and watch me work on the computer, during hours. She didn't seek my attention, or ask for anything. She would just look at me. After two weeks she grew on me, she had become my dog, and I needed a new name for her.

Scrabble reminded me of the dog in Las Meninas, a painting of Diego Velázquez, which I had seen many times at the Prado when I lived in Madrid: 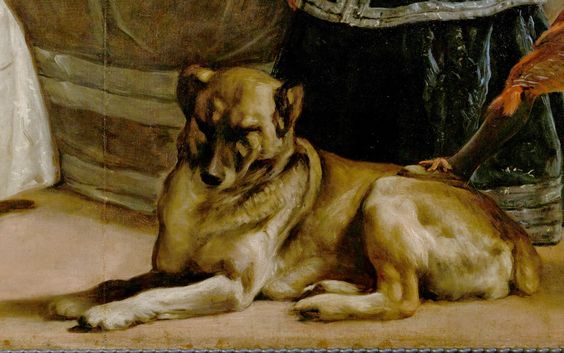 I would have called her Menina if I didn't know names in Spanish are inevitably contracted to two syllables, so I christened her Nina. From that time on I felt the owner (or parent) of the dog rather than the custodian.

Her name, however, turned out to be almost irrelevant. I would communicate with her through whistles, when I called her out she would come to me running at full speed, as if I had the most wonderful treat. I would shower her with affection when she came to me, and being a mostly neglected dog she would delight in it.

Over time she came to overcome her lonely ways. She knew that if she came to me while working and nudged me with her nose enough, she'd eventually have her walk. She loved walking around the neighborhood without a leash. People would commend on how well behaved she was doing this, only a whistle was necessary for her to come running by my side, and my neighbors would ask me how I trained her. She trained herself I would reply, because I never gave her any reinforcement other than my shower of affection when she came to greet me after a whistle.

They say dogs are like their owners, and in our case I could see the truth in the saying. Nina was a dog that didn't seek affection, but would relish in it when given it to her. When it came to other dogs, she would be very reserved and stand still. The other dog would approach, and if it sniffed her ass, she would growl and fake bite the other dog. However, if the dog demonstrated manners and they had chemistry, Nina would playfully jump around and play with the other dog. But, in general, she hated being around other dogs, and going to the dog park made her miserable. I could see myself in her.

During the pandemic we got to spend inordinate amount of time together, clearing the land behind the house. As when I was working at the desk, she would lay down at a vantage point and look at me clearing weeds or chopping trees or whatever I was doing. My mother used to say she was taking care of me, and I felt the same. She wouldn't take her eyes off of me. I would sometimes look back and we would stare each other in the eyes, I would feel my spiritual heart flow with pleasant emotions. We were in love with each other, in a way in which only a pet lover can understand.

Over time, she seemed to lose some of her obedience to my whistles. I would arrive home and she wouldn't come to greet me. I felt some resentment, Nina is taking me for granted I would think. However, I felt great shame when I realized that she was actually going deaf, and by this simple event I realized how quick I am to attribute lack of love or appreciation to oversights in my own human relationships. Our relationship was not only nourishing but instructing my soul.

After two years in Puebla destiny took me to Canada to take care of my grandparents. I felt grief, I thought I wouldn't see Nina again, I said preemptive goodbyes, grieving her as I left her with my sister again.

I came back after nine months to find her in much worse shape than when I left. When we encountered again she came to me and put her paws on my lap. She didn't wag her tail. I felt her say "finally, you are here", but she was sad, she didn't have the zest of life she used to possess. I thought it would simply be matter of taking her back home, giving her her usual routine, but it didn't turn out that way.

Her health deteriorated. Two days ago I came back from the gym and couldn't find her inside the house. I texted my sister to see if she had picked her up to take her to the vet, as we had gone a couple of days before and we had scheduled a visit that day. She hadn't. I searched all over the house and finally found her in the front yard, weakly digging a hole.

I knew she was digging the hole to crawl in and die. I texted my sister to pick us up after she was done with work, we would take her to the vet. Nina gave up digging her grave and laid down under some bushes. She vomited twice, and then laid still, breathing in short breaths, in too much pain to respond to my caressing. I laid down next to her. I want to die, I almost heard her say. I got up and dug a deep hole in the backyard, knowing the inevitable would come.

We took her to the vet, who had seen her a couple of days before. Her tonsils were much better, but her general state of health was very bad. The vet speculated a problem with the liver on top of the pulmonary problems she was having. He gave her pain killers and she spent the night at the hospital.

The next day I went to see her. She was lying down in her pen, I came in and gave her some affection. She was indifferent. I understood it was time. The vet said he wanted to keep her under observation two days more, she might make a recovery. I insisted it was time to put her down. I muttered something about not having enough money, the vet said it shouldn't be a matter of money, we could arrange something. I regretted mentioning money, but it was on my mind. Was my intuition that she wanted to leave influenced by the fact that I'm broke, and I was traveling three days after so I wouldn't be able to take care of her if she was making a recovery?

I still ask myself this after insisting that she had to be put down. But I look back into my actions and my grief, and I know I loved her too much, and that I understood her intentions when she was digging her own grave as to know that she wanted to end her suffering. Yes, I admit that if I had enough money I would have waited the three days of hospitalization that the vet was suggesting, I now all too well that when we are sick we sometimes want to die, but then we make a recovery and these thoughts seem baseless. Dogs, who live at the edge of the present moment, surely feel the I'd rather be dead at this moment more than human beings do, knowing there's hope ahead.

The vet put a tranquilizer in the IV drip which made Nina super tame. He then set up the table with a table cloth, a candle, and some toys, and left me to say goodbye to Nina. 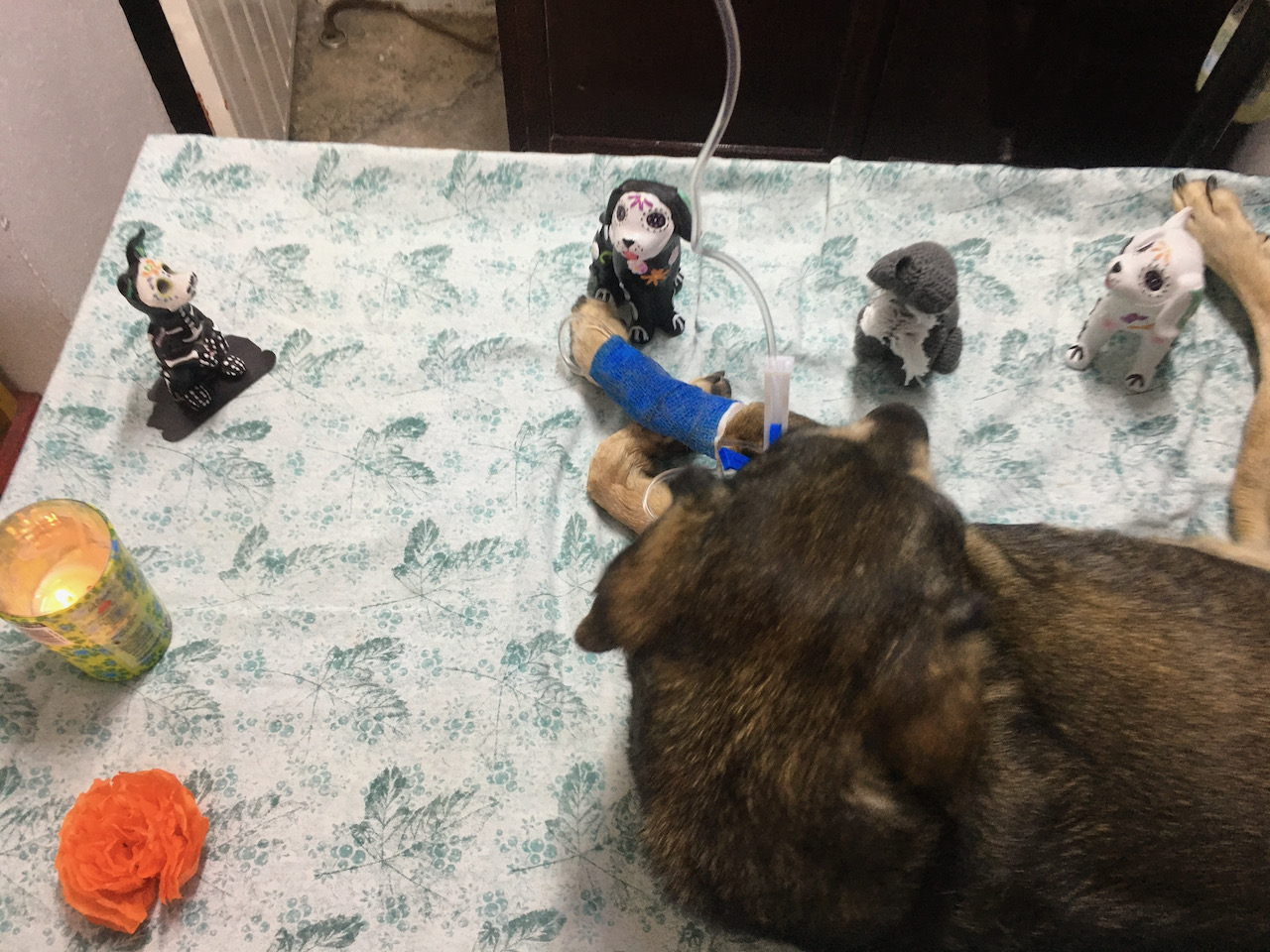 Tears trickled down my face, I sobbed. It's happening again as I'm writing this. I thanked Nina for all the moments we shared together. We will meet on the other side, I'm sure about that I told her. And then, in an archetypical imagination I saw myself dying and Nina coming to guide me to the other side, as in Mayan cosmology. We jumped on the stones of a riverbed, in full health, happy to be reunited.

The vet came and asked if it was time. I assented. He produced a syringe with a blue liquid. Nina's breathing stopped after a big sigh, and with that, she left this world.

I came back to my house with my sister. We placed Nina in the hole I had dug previously, and put some flowers on her before covering her with the earth. From earth we come, and to earth we will come back. I said a little prayer in my heart, and said goodbye.

Thank you Nina, we will meet again.