Part of the reason why I wanted to come to Montréal was to get to know my grandparents better. In my personal narrative I'm improving my relationship with my family so that I can improve myself, but it is experienced as a subtle impulse which I follow like a leaf would float in a stream. Sometimes I feel surprised to find myself here in Montréal, as if I was placed here instead of coming here.

In the space of the 35 years I've lived outside of Canada, I visited my grandparents three or four times only. I remember them more from my early childhood. I had great love for my grandmother, with whom I am not genetically related because she is my grandfather's second wife, but since she did not have children of her own, she treated her grandchildren with a lot of affection.

My grandfather was different. He's the kind of person who ignores children because he's not naturally drawn to them. His own children--my father and his siblings--complain that he was emotionally unavailable while growing up, putting most of his attention towards his work as an engineer specialized in industrial boilers, and spent most of his free time at the golf course in summer and at the curling club in winter.

Since my grandfather died just two days before arrived, I questioned this narrative. I was afraid that I would not be able to emotionally connect with her after so many years, and when I met her she was a bit distant and cautious, as she was meeting a full grown man (in the body, at least) but I felt an unexplainable affection towards her and I knew things would be alright.

It was tough speaking with my grandfather over the phone. Like myself, he didn't enjoy small talk and would answer questions in monosyllables. He had hearing difficulties, and if one would go into a monologue he would say "I'm sorry, I can't hear well". I gave up and thought I would have time to chat with him when I arrived, but I was wrong.

Through his obituary I found that there were many things which we had in common. They would have made for interesting conversation. I've been finding many things about him in a segue way: yesterday, when I arrived to the nursing home the receptionist--who was harsh and stressed--completely changed her demeanor when I said I was John's grandson "oh, he was a true gentleman", and went on telling me many words of admiration and condolences for our loss.

Yesterday a childhood friend of my grandfather called on the phone. He already knew about my grandfather and was trying to get ahold of my grandmother. After a brief introduction he asked me if I was busy: "not at all" I told him, "in fact, I would love if you told me some stories of my grandfather, since I barely got to know him".

He told me that as children they used to bike around all of Montreal. They would go out early in the morning and come back late in the evening. They were together in the Boy Scouts and that he had amassed quite a number of badges at least 20, he said. Going through a closet, I had seen a patched up shirt--that must be it. Today I got it out and snapped a picture of the badges on one sleeve: 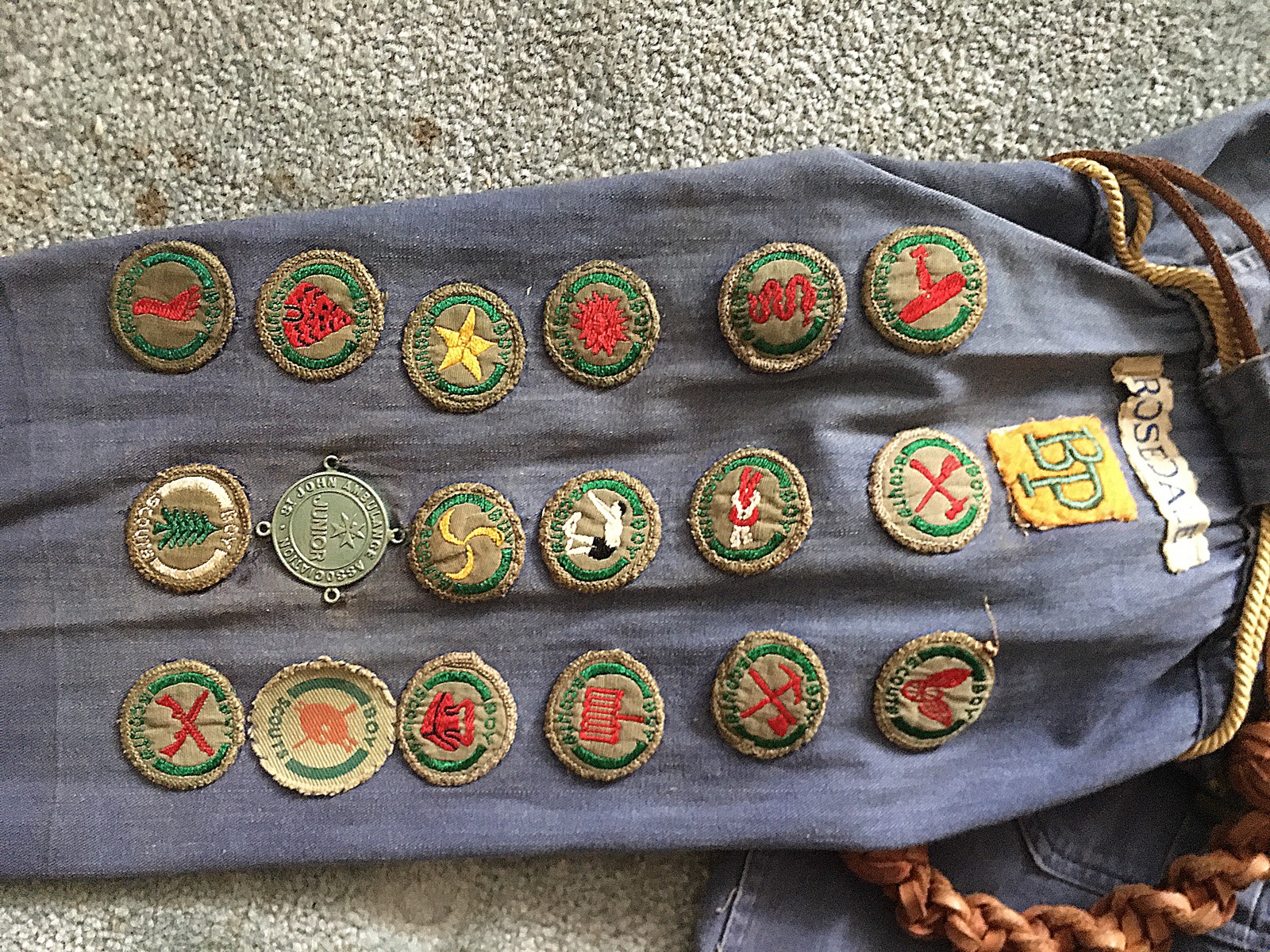 It seems I will meet my grandfather slowly, through his relationships. I asked my grandmother: "how is it that grandpa was so quiet, and yet so social?", she laughed "you are right, he loved attending a good party".

What are we, but our relationships?